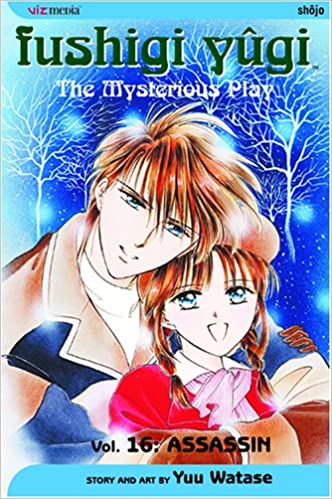 Summary: When Tamahome and Miaka get back to the real world they end up in Yui’s room. It’s pretty funny because they have a mushy scene in front of her without realizing where they are and Yui has to let them know. Miaka has a suspiciously normal day at school. When it ends, the attack begins. They do end up winning against Lian and Tamahome and Miaka go on a trip. They meet up with Keisuke and the girl he has a crush on accidentally. It’s painfully obvious that she’s the next villain. I still dislike the forced girl contention. The villain invites Tamahome to her room at night. He decides to go (bleh, he should know better). She bites him and takes over his mind. Miaka witnesses part of the attack before she’s pulled back into the book. It turns out that Nuriko has an older brother they never mentioned still alive and that’s where the next sphere they need is. Meanwhile, Keisuke finds Tamahome in Miiru’s room, naked. He makes some accusations. Miaka summons Tamahome into the book so that he can absorb the next sphere. That’s when the parasitic demons start coming out and Nuriko’s brother makes a run for it. Tasuki and Miaka go after him. Tasuki has a lot of mean things to say about Tamahome going to Miiru’s room, Miaka falls off the horse in protest. (Sorry, I’m with Tasuki.) Then they get attacked. Miaka sucks the poison out (does this work in real life?). Then she decides that she needs to suck the demons out of Tamahome. They get the demons out of Tamahome, he absorbs the stone, they go back, but it turns out that they’ve been gone the equivalent of two months in the real world. Miaka’s family is a little upset. Keisuke acts like a toad. Miiru is killing people but when she confronts Tamahome, he destroys the curse doll she was using against him.

There are real demons inside of you. It’d be a shame to defeat yourself before battling them. – Chichiri to Tamahome

The good: One of the chapter covers is inspired by Snow White and it’s cute.

The bad: Keisuke, Miaka’s brother, started acting really stupidly about the girl he has had a crush on for less than twenty-four hours and takes it out on Miaka and Tamahome.

The ugly: Miiru sexually assaults Tamahome so that she can control him and then put parasitic demons inside him.