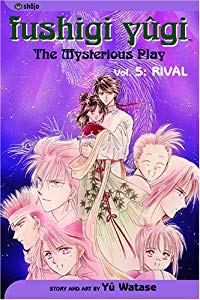 There’s a spoiler on this cover.

Also, perhaps ironically, this post series has become rather cathartic for me. I’m enjoying myself more than I thought I would.

Summary: Miaka is studying for her exams late at night when mysterious music starts to play. The team goes back to Tamahome’s village and then is attacked by bats. Then they think they’ve found the last warrior, Chiriko, major foreboding from a scene with Nakago crushing a bird. (Very much a “if the bird will not sing, kill it” moment.) But they think they’ve found the last warrior so they contact Tamahome via a screen and a spell. This scene is genuinely cute and funny. And it shows good sense because they need to contact him before rescuing him. Unfortunately Yui overhears. Second cringe inducing scene between them. Yui cries at Nakago who gives her a mysterious drug promising her that it will make Tamahome hers. She doesn’t use it on him until he confronts her about being Miaka’s enemy and he tries to leave. Tasuki, Chichiri, Miaka, and Mitsukake’s cat go to extract Tamahome. Unfortunately they find out that something has gone horribly wrong. Miaka is captured and seduces her way out of the cell. *snort* *giggle* But Yui lures her with food. The brainwashed Tamahome smashes her arm. Miaka manages to escape with Chichiri’s help but when he leaves to do reconnaissance she ties up Tasuki so that she can go back to where they were all supposed to meet up. Brainwashed Tamahome meets her, she figures it out. Tasuki comes to save her, they battle, Miaka begs Tasuki not to kill him. Chichiri uses the cat to get back to Hong-Nan. Miaka says goodbye to Tamahome. He starts crying but can’t consciously explain why.

The bad: Miaka tying up Tasuki and going back to the prearranged meeting place again was really stupid. I don’t know what she was hoping for. Maybe that Tamahome smashing her arm was a ruse and that he’s really going to meet them and everything will be okay. Also, she seems to be in a delirious state. Maybe that’s the explanation. She’s delirious from pain and blood loss. Tying up Tasuki, the voice of reason, didn’t make sense except to prevent him from stopping her. And then giving Miaka and brainwashed Tamahome some alone time before Tasuki comes in to battle him and Chichiri has to create their escape route.

The ugly: I hate to say it but Tamahome gets thrown under the bus a little. Miaka and Tamahome’s fellow celestial warriors write him off. They can’t do anything so they leave him behind. It’s permanent, he’s gone, nothing to be done. I mean, ouch.