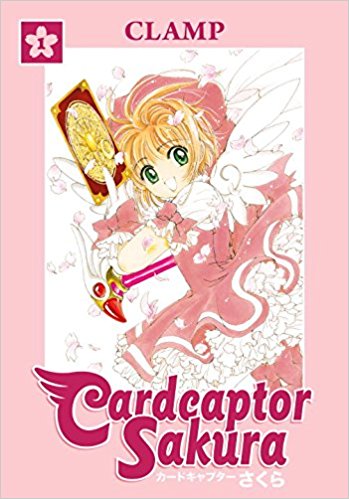 Summary: Sakura accidentally opens the Book of Clow and releases the Clow Cards. She has been tasked by the guardian of the book to retrieve the cards again.

Likes: The art, I’m a huge fan of CLAMP’s art style in general and Sakura’s costumes. I also loved rereading this. It was still entertaining and funny to me as an adult. The plot is interesting too. The primary focus is Sakura getting the cards back, a similar format to Pokemon and the first Sailor Moon anime. There’s an opponent, the main character defeats that opponent. But there are plots running alongside it as well which keeps this from being boring. I also love that sexuality is depicted in a flexible and non-fussy way. Toya and Yukito have a subtle relationship that isn’t fetishized. It also redeems Syaoran’s character a little that he has a crush on Yukito like Sakura does. Tomoyo loves Sakura too but doesn’t force her feelings (or herself on Sakura). Their relationship is beautiful because they genuinely care.

Dislikes: One of Sakura’s teachers has a romantic relationship with one of her classmates. She expresses to her classmates that she has an older boyfriend but won’t tell them who he is. At one point he gives her a promise ring with the expectation that it will be changed out for a wedding ring. I could be delusional but in this manga I’m fairly certain this is an innocent relationship. But she’s still a kid and the fact that he is thinking of her in terms of future wife doesn’t make me blush because of the cuteness, it makes me angry. Also, how dare he lock an elementary school student into a relationship with him? What if she wants to date other people in high school? Who are her age?

Overall I recommend this series for fans of Sailor Moon or Pokemon. And for a nostalgia read. I think it also holds up as a series over time. I still think it’s funny and cute.